July 03, 2011
(First, let me apologize if this post is specific to Google+, a service most people aren't even allowed in yet. However, there's already a lot of chatter about what it is and what it is not, and I wanted to collect my thoughts.)

It was sheer luck that a conversation I had a month ago led me to pen some thoughts about the qualities that can make or break social media platforms. At the time, I had no idea that Google+ was less than 30 days from launching it's "Field Test". In that post, I cite some literature on the "150-connection gap", which shows that the limit for social circles seems to settle in at about 150 real connections to real people, and that when you start interacting with more than those 150 real connections, you're acting as an Authority does to an Audience, not participating in a community/conversation. I then posit a hypothetical new social media service, and claim that if it can't "cross the 150-connection gap", then it will have a difficult time gaining traction amongst the general population. Facebook and Twitter eventually became decent at managing this dynamic. Buzz was horrible at it (more on that, below). So what can Google+ do to cross the 150-connection gap? The key is in the Circles feature, and in "re-sharing".

Will we "Make Lists"?

I know it's just a single data point, but I think Gina Trapani has a pretty strong answer to that question.

So let's assume for the sake of argument, that we're willing to make lists by using Circles, because they are useful to us. How many times have you decided not to post something to twitter because the audience is too broad, won't care about what you write, or it's a little *too* personal? Let's assume we are more willing to share with an audience that we think will be more interested in the topic we're sharing. Google is betting the farm on it.

What Circles can do for us

Presently some early g+ users are complaining that the Stream is too "noisy".

Robert Scoble documents this issue well here, where he says:


So, until Google gives us the ability to control noise Google+ will continue not being used by average people (my metaphorical “yo momma and yo daddy.”
The thing is what is noise control?
Two things, one of which Google is known for:
1. Search. The ability to say “show me all cool new items that talk about venture capital.”
2. Sifting. This is similar to search, but goes beyond. “Show me all future items that talk about venture capital.”

Following someone does not necesarily corellate to targeted ideas. I follow Jeff Jarvis to hear about social media development and it's impact on disrupted institutions. I get a lot of penis news too.

Essentially, Scoble is highlighting a problem that Buzz was also notorious for: If you follow a famous person, you are beset with noise that drowns out your "real" connections, and leaves you little ability to gain topical control over what you hear from whom.

Scoble wants downstream filtering (read, "an algorithm") to help him select what to read (and this is by no means a bad idea, escpecially given how good Google is at this sort of thing).

Google+ tackles this problem head on with their Circles feature, but the present limited population of g+ is hiding how useful Circles can be. The most useful part about circles is that they *filter twice* - I pick who I follow, and they pick what they share *topically*. In g+, the intersection of these interests will be what I actually see. 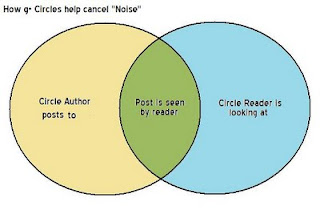 It is a huge step forward in crowdsourcing curation. It can hugely reduce the noise that a reader gets compared to twitter and facebook. It may rely on the author to select their (initial) audience,which may seem inconvenient, but in practice this is exactly the feature we've been clamoring for in other social media tools. Circles finally gives us that power.

So why don't we see this emergent property of Circles yet?

Presently, Google+ is populated only by "Internet Celebrities" (to quote Leo Laporte), and their nerdly hangers-on (myself included), and I think this population is masking this very important feature, making the graph (at present) look more like this: 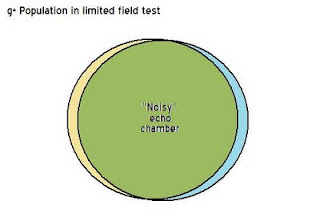 The Internet Celebrities are followed by almost everybody, and they're making everything public, as is their way. (Your mom isn't on g+ yet, and most g+ conversations going on right now are--surprise!--about g+).

If Circles allow an author to feel as though they're sharing with a targeted community (and more than just the Internet Celebrity/Early Adopter community is present), then they'll be useful enough at the source to help more open sharing, and more targeted conversation. This can solve the "Community" problem of social networks, but what about the transition past the 150-connection gap to an "Audience"?

Jeff Jarvis highlights a currently talked-about issue with re-sharing, where he essentially says, that disabling re-sharing stifles discovery by a third-party audience. (From my standpoint, this is a kiss-of-death to an emerging social media technology). Sometimes, we may *want* that discovery stifled, and should be allowed to announce it to our circle by disabling re-sharing (which is, by no means, a guarantee that a malicious member of the audience won't find a way around it--Jeff's excellent point). The question is really a matter of *defaults* (Defaults matter!), and I'm glad to see that g+'s default is to allow re-sharing.

Because re-sharing is one mechanism by which we crowdsource curation which is important in the long-term for social technologies, and the Internet in general. But it also allows a relevant post to jump from Community to Audience, which is, as cited before, the key feature for a social technology to "take off". That's not to say we ought not to offer as much control to the author as possible over their intended audience, but we should leave that control to the social pressures that work so well in this space, as opposed to relying on technology to lock away information in a space that was actually built for sharing it. We need the system simply to promote transparency of the author's intentions to their chosen circle (i.e. to let your circle know that the message was intended for them and only them), and let social pressures handle the rest. (If you violate my trust, you'll find yourself quickly removed from that Circle).

Google+ looks like it has the genetic makeup to be a very impressive social technology. If we find utility in "making lists", and sharing defaults are kept open, it has the tools to help people interact with thier close communities, as well as allowing relevant content to jump to a wider audience. There are many other hurdles to clear to see if Google+ will gain the critical mass of users needed to sustain any new social media technology, but it's off to a very promising start.